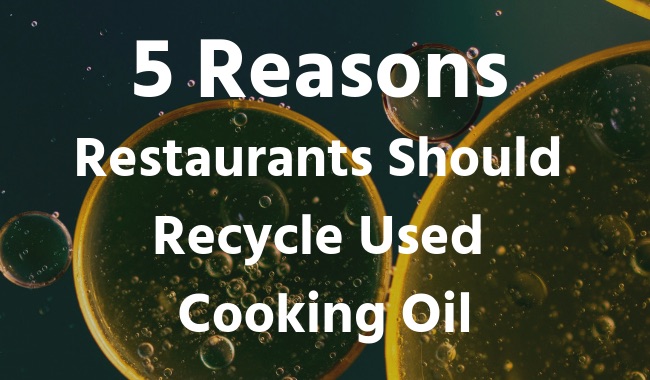 There is no denying it. Many of us have things we do every day that hurt the environment.  Perhaps the most common habits include:

While this list is by no means exhaustive, one thing that often goes under the radar is used cooking oil. Because of the way oil spreads, even a small quantity can cause environmental harm.

It’s estimated that there are almost 650,000 restaurants in America alone. All these restaurants use huge volumes of cooking oil every single day. Without the right cooking oil disposal procedures, such used oil is bound to have negative consequences on our environment.

Besides, it’ll also cause you a number of inconveniences. One, water will not be able to properly flow down the drain. As such, you’ll be forced to call a plumber. And two, the sewer down the street may begin spewing its unsightly contents onto the street itself.

Not only can this render your restaurant inoperable, but this can also cost you a tidy sum of money to repair.

2.   It can benefit local businesses.

Many restaurants are getting involved with cooking oil recycling. It is growing each day as an increasing number of restaurants realize the benefits.

In fact, in 2017, these restaurant oil recycling companies generated a whopping $4 billion in revenue. This amount is projected to rise even further as more and more restaurants join the recycling bandwagon.

In addition, the companies that specialize in recycling used cooking oil can help support the local economy. A study found that for every 100$ spend with local companies, 68$ was kept within the local community.

That extra money can help create new jobs, lower costs, and provide an economic stimulus for new businesses to come up.

3.     Used cooking oil can be recycled into biodiesel.

One main reason for recycling cooking oil is to make fuel. Biodiesel is a renewable alternative to petroleum-based diesel fuel. Most U.S. biodiesel is produced from resources such as soybean oil, and waste cooking oil. Biodiesel can be useful for heating buildings as well as powering vehicles.

Meteorologists all around the world are raising the red flag over rising temperatures. One key factor that is contributing to this problem is greenhouse gas emissions.

These emissions arise mostly from the use of modern transport systems like ships, trains, aircraft, and vehicles.

This has led some countries to establish strict laws regarding greenhouse emissions. But while others are taking action, some are rather reluctant to curb the problem. As a result, this has led to increased emissions including carbon dioxide and methane – two gases that strongly compromise the integrity of the ozone layer.

By using biodiesel, greenhouse gas emissions can greatly be reduced.

Properly disposing of used cooking oil is a clear win for restaurant owners in terms of savings. Cooking oil disposal companies usually charge an average of $35 for collection.

That cost excludes things like costs of storing and managing the oil, and working hours. By recycling your cooking oil, you’ll not only cut these costs, but you’ll also get paid for doing so.

Your oil recycling company will pick up your used cooking oil and take it for recycling. So besides being a cost-effective solution, this may also be an easier solution for you and your business.

How to properly dispose of used cooking oil in your restaurant 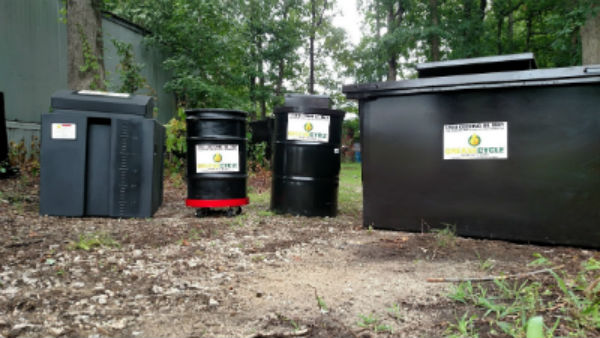 How to choose an oil recycling company for your restaurant

Not all used cooking oil collection and recycling companies are created equal. As such, it’s important to do your research prior to hiring one. The following are some questions that can help you pick the right one for your restaurant needs: 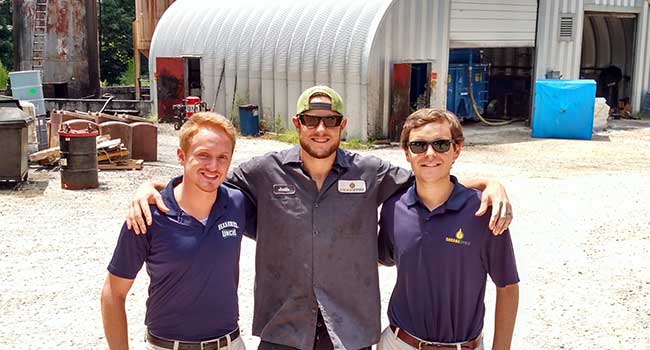 As you can see, recycling used cooking oil provides many benefits to restaurant owners. Recycling that yellow oil does not only boost your restaurant’s green credibility, but it may also be able to turn a profit for you. So don’t put it down the drain or throw it away!